Have your Lutheran Hymnals with you all the time on your hands. 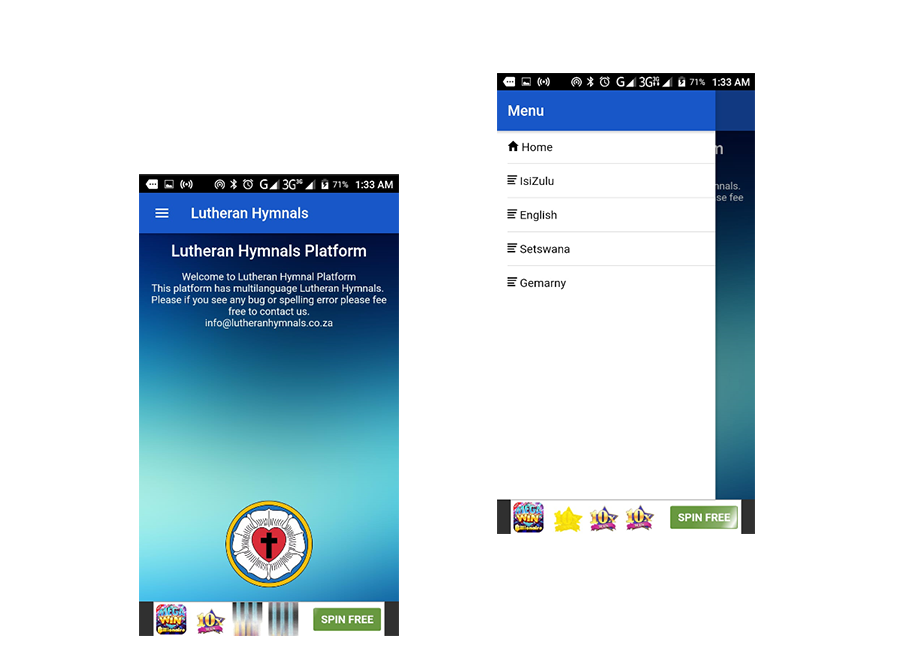 The Lutheran Hymnal (TLH) is one of the official hymnals of the Lutheran Church–Missouri Synod. Published in 1941 by Concordia Publishing House in St. Louis, Missouri, it was the LCMS' second official English-language hymnal, succeeding the 1912 Evangelical Lutheran Hymn-Book. Development of TLH began in 1929 as a collaborative effort of the churches of the Evangelical Lutheran Synodical Conference of North America and became the common hymnal for both the LCMS and the Wisconsin Evangelical Lutheran Synod (WELS). Containing 668 chorales, hymns, carols, and chants, plus the liturgy for the Common Service, Matins, Vespers, the propers, collects and prayers, the suffrages, canticles, psalms, and miscellaneous tables, TLH became an extremely popular and beloved worship resource in the Lutheran church in North America, and attempts to succeed it in more recent years have often met with strong resistance.

The first attempt to replace TLH began in 1965, when the LCMS began work on the Lutheran Book of Worship and invited other Lutheran denominations in North America to participate in its creation. As a result of disagreement and compromise with the other churches involved in LBW's production, the LCMS objected to some of its content, and Lutheran Book of Worship was published in 1978 without the endorsement of the very church body that initiated its production.

An LCMS revision of LBW was quickly published in 1982 under the title Lutheran Worship. Lutheran Worship (LW) was intended to replace TLH as the official hymnal of the LCMS; however, many congregations were still unsatisfied with the final product, leading them to continue using TLH.

According to a 1999 survey by the LCMS' Commission on Worship, approximately 36% of the synod's congregations were still using TLH as their main hymnal, and even more were continuing to use it in combination with LW and/or other hymnals and hymnal supplements. An even newer hymnal, Lutheran Service Book (2006), has restored many of the former hymnal's features in the hope that more widespread use can be achieved. In the WELS, TLH was effectively replaced by Christian Worship: A Lutheran Hymnal in 1993, and few congregations continue to use it on a regular basis.

The Lutheran Hymnal is commonly referred to by many to as the "Red hymnal," in contrast with LW, the "Blue hymnal". However, the "Red hymnal" moniker is somewhat misleading. The initial editions of TLH were in fact bound in blue, and the hymnal has been simultaneously available in both red and blue cover versions for much of its history.

Although the red cover version is now more common, many congregations' pew racks are filled with blue-covered copies of the "red" hymnal. Generally, members of these congregations refer to TLH simply as "the old hymnal". The widespread use of Lutheran Service Book (LSB)[1] has begun the process of resolving the LCMS' hymnal controversy, as initial reviews have been generally quite favorable.

Concordia Publishing House has announced that all TLH-related supplemental materials, including specialized accompaniment editions and the agenda, will go out of print when current supplies are depleted, but plans to continue to produce the pew edition for the foreseeable future. TLH remains an officially sanctioned hymnal of the synod, and it is unlikely that the synod will ever formally decommission it as an official hymnal.